My C-section was scheduled for 7:30 am on March 24.  We arrive at the hospital at 5:00 am to register and get prepped.  I'm excited about meeting my baby in a few hours!  I'm also a little bit anxious about what to expect during the procedure, as I've never had a major surgery before.  I'm just hoping that everything goes well.

Before I know it, it's time to wheel me into the OR, which is much smaller than I expected.  They move me onto the surgical table and give me a spinal block.  It wasn't painful, just weird.  Immediately, my toes and calves start to tingle and go numb.  The nurses have to help me lift my legs and get positioned on the table.  As I lay on the table more of my lower extremities start to go numb, and eventually I'm numb up to my chest.

Good thing Greg was there!  I grip his finger so tight that I think I might've cut his circulation off, and I ask the anesthesiologist what I should do if I throw up.  Do I turn my head?  Swallow it?   And what would come up?  I hadn't eaten anything for about 12 hours.  Well, whatever came up the anesthesiologist suctioned out of my mouth.  Ugh.

Before I know it, I can feel pressure at the top of my belly. The doctor is helping the baby out. My doctor says, "You made the right decision, Cheryl.  There's no way he would've fit through your birth canal. He's beautiful!" Greg says, he heard some of the nurses say, "He's got big hands and feet!" and "Look at all his hair!"

The nurses whisk the baby away, and Greg goes with them.  Meanwhile, my doctor is sewing me back up.  The anxiety subsides...must've been the drugs the anesthesiologist gave me after they delivered the baby.  I hear crying in the distance.  Is that my baby?  I wonder what and who he looks like.

Greg wheels back in with our baby. "Hi, baby.  I'm your mommy."  I can't believe that I'm finally meeting my baby boy.  He's definitely healthy!  And he's got a healthy set of lungs.  Hmm...I can't figure out who he looks like.  I think he's got daddy's lips.  Who's nose is that?!  Open your eyes, I want to see your eyes. Guess I'll have to wait for that.  Time to give you back to the nurses.  I'll see you soon!
Posted by Cheryl at 10:06 PM No comments:

So, what day do you want to have your baby?

So, we went back to the OB today.  Based on today's ultrasound, Baby Tai's estimated weight is 9lbs 3oz and his abdomen is still larger than his head.  My OB said that even though he's over 9 lbs, technically I could still try labor and deliver vaginally.  Her main concern is the potential complications if his shoulders don't fitting through my pelvis during delivery.  Apparently his abdomen measurement is an estimate for his shoulders as well.  After some discussion, we opted for a C-section as the best option for baby and mom.

The next question from my OB, "So, what day do you want to have your baby?"  Uh...hmm...I never thought about it.  I figured he'd pick the date when he was ready to come into this world.  Guess we're going to do that now.  So, we picked tomorrow, March 24 in the morning.  Exciting!
Posted by Cheryl at 3:18 PM No comments:

Yesterday was my last day of work!  I'm officially on maternity leave.  Woohoo!  No more driving all the way up to Redwood City and back.  Now, I can:
Several people have told me to enjoy this "Me" time because once Musubi arrives, "Me" time will be a rare thing.

Posted by Cheryl at 9:09 AM No comments:

Email ThisBlogThis!Share to TwitterShare to FacebookShare to Pinterest
Labels: Pregnancy

We're DEFINITELY not having a small baby

We're going to the OB every week now.  At my last visit, we had an ultrasound to see how things are going.  Here's what we learned:
So, I'm kinda freakin' out about how big he is/could be.  Greg is amused that he's on the big side and says that I've done a good job feeding him.  Uh huh....he doesn't have to push Baby Boy Tai out into this world!
We'll have another ultrasound in a few weeks to see how things are progressing and determine how Baby Boy Tai will arrive in this world.  This seems to depend on a couple of things: 1) the size of his belly relative to his head and 2) his estimated weight.  As i understand it, these are the possible outcomes:
Sounds like he is definitely going to be born in March though.  My OB doesn't want me to go past 40 weeks because he's only going to get bigger!

We're in the home stretch!

We're officially in month 9!  Only a few more weeks before we finally get to meet Baby Boy Tai.  I can't wait!  Sometimes a month seems like a long time.  And sometimes a month doesn't seem that long at all.  What I've heard is that this last month is the most uncomfortable of them all.  I'm beginning to understand why.

I'm tired because I can't really get a good night's sleep.  It's hard to get comfortable.  Either my hips start to ache after a few hours of sleeping on one side and I have to switch sides, which isn't that easy these days.  Or I have acid reflux and have to sleep upright, propped up on as many pillows as I can find.  Or I have to get up to go pee every couple of hours.  I guess these sleepless nights are good practice for Baby Boy Tai finally arrives.

I get winded walking/waddling short distances or climbing a flight of stairs.  I'm sure it's because Baby Boy Tai and my uterus are pushing up on my internal organs, including my lungs and rib cage.  We're running out of room in there!  Sometimes when he kicks me in the ribs, it really hurts.  But that's not as bad as when he punches me in the bladder.

I can't eat very much in one sitting.  There's just not enough room for my stomach, which has migrated up to my sternum.  And did I mention the acid reflux and heartburn?  Yeah...that's fun too.

But all of this is will be worth it, when I finally get to meet my baby boy.
Posted by Cheryl at 8:17 PM No comments:

"You're not going to have a small baby."

At my last doctor's appointment, my OB told me that she didn't think I was going have a small baby.  What does that mean?!  I didn't ask her when she said it...probably because I was in shock.  Does that mean I'm going to have an average size baby?!  Or am I going to have an abnormally large baby, like that 19lb baby in Indonesia, where I'm going to need a c-section?!  And why does she think that?  Every time she measures my belly, she says my numbers look good.  They're not crazy off the charts.


Greg says I'm obsessing about this too much.  He would be too if he was the one who was going to labor and push a bowling ball through a 10cm opening.  Good thing I have another doctor appointment next week so I can ask my OB what she meant.
Posted by Cheryl at 1:34 PM No comments:

It's a Shower of Pooh!

A couple weekends ago, my friends threw me an Winnie-the-Pooh themed baby shower. It was a lot of fun seeing everyone. We ate lots of food, played baby shower games and people decorated onesies or bibs for Baby Tai.

Ed and Char made an amazing Winnie-the-Pooh cake! Leeya and Aimee also made an adorable diaper cake.

In case you haven't figured it out yet, our nursery theme is Classic Winnie-the-Pooh. I realized that my friends are all incredibly talented. I feel so lucky to have such awesome friends and family. The only bummer is that we didn't take a group picture or more people pics from the shower. Oh well. More pictures, if you're interested.

Posted by Cheryl at 7:51 PM No comments: 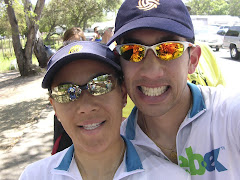